You are here: Home1 / Blog2 / Steam Quality3 / Why the length of your burette will effect the Non Condensable Gas res...

In the modern pharmaceutical company the QA department is really a jack of all trades and master of none. They have to make decisions on a number of specialist topics that they are unlikely to have spent years studying. They endup having to rely on guidance from regulatory standards  for the techniques and the pass/fail values to sign off on tests.

What could be more frustrating though when the actual test procedures leaves a lot to be desired and the results are affected by that same ambiguity as the test procedure.

For my example I’m going to put forward the Steam Quality Non Condensable test. On face value it’s pretty straightforward. Just cool the steam and separate out the gases from the condensate. However, it’s not at all straightforward.

In my example to start with you have to step back in time to when and why the test was developed. Back in the 1970s the department of health in the UK was asked to help the heads of sterile service departments have more assurance that the sterilisers they were using were operating correctly and actually sterilising the loads put into them. Remember in the 1970’s worked on cams and rotating drive shafts.

After much thought, the end result was the Bowie and DIck test. A system that to this date is used every day throughout the world giving guidance to the operator that the cycle and steriliser is capable of removing the air and sterilising the test pack with the right temperature and moisture levels.

Once introduced though, a department had issues, the test was failing and they could not figure out why, so the department of health was called in. After a thorough investigation it was found that high levels of Non condensable gases were to blame. As this was a potential issue for every hospital in the UK a test was developed that would enable any hospital to use equipment that should be readily available to put together a test rig to test the amount of non condensable gases.

And in the end the test as seen in HTM10 and onwards through HTM2010 and EN285 was put forward as the standard to use. 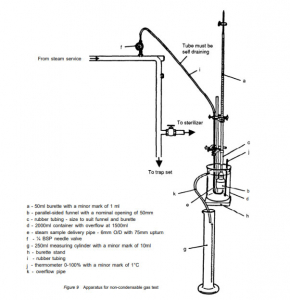 To the keen eyed reader it can be seen that the equipment is more like what you would expect in a school chemistry class than a modern pharmaceutical company. The test is basically sound, cool the steam, separate the gas from the condensate. The test pass/fail is set with a value established back in the 1970’s. How they came up with a 3.5% level I have not been able to work out. However from experience it does seem to be right. It’s not hard to achieve <3.5%. If it fails it’s generally a boiler feed pump timing issue or piping rather than a fundamental problem.

Now back to the topic of this blog, the length of the burette and why that has an influence on the test result. To explain this to you we need to understand what is happening inside the burette. In the example above of the “standard” setup we can see that the water level in the burette is pulled right up to the top. To get the water to the top a vacuum is required.. Any non condensable gas that enters the burette will expand as it travels up. Those little bubbles at the bottom expand into big bubbles at the top.

When the SQ1P was designed over 20 years back the emphasis was on keeping to the standard as much as possible but improving on the repeatability and usability of the test. Rather than a 50ml burette a 25ml was used. The limit is 3.5 ml not 35ml after all. The configuration was the same though, pulling a vacuum to raise the water level.

With the SQ1E the consideration changed, aside from making the equipment compact and robust it was decided that a standard reference for the pressure of the air in the burette at zero should be in fact zero. This is why the water outlet is at the same height as the zero mark on the burette. While I do not know the reason the 3.5% pass mark was used I’m very certain that nowhere in the formula was x inches of vacuum part of it.

Ok,I think I have established that the burette water level and hence the vacuum level has an impact on the volume the gas is in the burette. The question is now how much of an effect does it have? If it’s miniscule then really why worry?

The result is as expected: air under a vacuum expands more than air at atmospheric pressure. In my test (photos below) the volume of air above the water level at the start expanded an extra 0.4ml. The crux of it is if you use a vacuum assisted burette you are more likely to fail the test than if you use an atmospheric zeroed system. 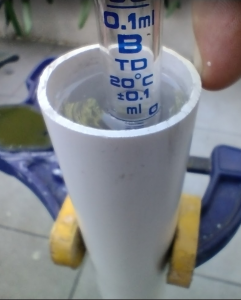 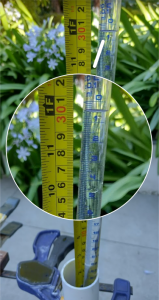 Now back to my comments at the start of this blog. What are the QA people to do? If presented with a result of 3.8 and the spec says 3.5. Great turmoil can ensue. Meetings held, and money spent trying to resolve the issue. I know of many $1,000 spent trying to sort the issue. Who wants to accept a failed result and explain to the inspectors why you’re ok with 3.8% when the pass is 3.5%.

IMHO the standard needs to be rewritten so that there is a sensible test regime. One that is based on physics and not an old outdated test setup that was never really thought through properly in the first place.

Don’t forget to read my blog on the issue with pitot tubes. Here

Because these cookies are strictly necessary to deliver the website, refusing them will have impact how our site functions. You always can block or delete cookies by changing your browser settings and force blocking all cookies on this website. But this will always prompt you to accept/refuse cookies when revisiting our site.